Gazprom, a state-run gas major, and Almaz-Antey, a Russian defence systems manufacturer, have signed a so-called “road map”, an action plan for cooperation in the field of high-tech oil and gas equipment development and manufacturing. The document was signed on 25 May in St. Petersburg by Chairman of Gazprom Management Committee Alexey Miller and Almaz-Antey CEO Yan Novikov. 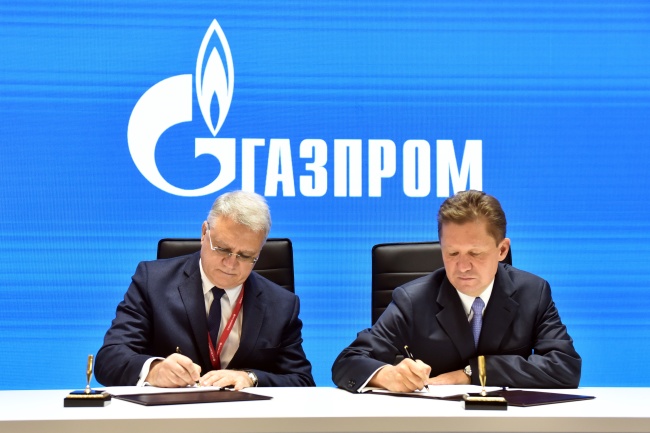 According to the document, until 2023 Almaz-Antey will develop for Gazprom high-tech equipment for offshore hydrocarbon production, gas processing and LNG production, which is currently not manufactured in Russia and is imported from abroad. All the prototypes of the new equipment will be tested and certified by Gazprom.

For designing and manufacturing of the new equipment, Almaz-Antey intends to use its manufacturing facilities in Nizhniy Novgorod, namely Nizhny Novgorod Machine-building Plant and “70 years of Victory” Plant.

Almaz-Antey is a major Russian manufacturer of military equipment, including air defence systems, missiles, firearms for aircraft and armoured vehicles, satellite communications equipment and others. Recently the company was actively seeking to expand its business into a civil field, producing various types of equipment for communications, medical, and energy industries. In 2014 Almaz-Antey was included by the U.S. in the Sectoral Sanctions Identifications List (SSI).

As we noted earlier, the sectoral sanctions, imposed by the U.S. and E.U. on the Russian oil and gas industry after the Ukrainian crisis in 2014 and prohibiting Russian companies to obtain high-tech equipment for deep offshore and shale oil projects, will eventually result in the loss of the Russian market by Western companies. Though the sanctions may negatively affect oil production in Russia in the mid-term perspective, they would also help the government and the country’s major energy companies to see that Russian oil and gas sector lacks a range of vital technologies needed to keep Russia on the list of the world’s biggest hydrocarbon producers and to sustain its ambitions of being an ‘Energy Superpower’. As the result, they will dedicate significant resources to develop their own technologies and at the same time will look for alternative suppliers in Asia. Engagement of such companies and organisations as Almaz-Amtey, Roskosmos and Rubin demonstrates significant attention Russian government pays to the import substitution in the oil and gas sector. All of the mentioned companies are well known in the international markets and have a reputation of technologically advanced companies in their respective industry sectors and market niches. As the result, in the long-term perspective European and American companies may completely lose Russian markets and, moreover, find themselves fighting for contracts with new competitors who would offer their newly developed technologies in the international markets.